Everything I know about making pizza I learned from Daniel Kotler

According to my Amazon purchase history, it was Sunday, October 11, 2009, that we were lazing around with our friends Dan and Sue and we decided we'd just hang out and watch the first season of Dollhouse. I bought the whole thing on Amazon's Video on Demand, and we started watching episodes.

It got close to dinner time, and Dan was going through a home made pizza phase at the time, and we thought about making some pizzas. I wasn't sure if we had all the ingredients in the house, but it went something like this:

Me: Oh, and we've got a big bag of grated mozzarella from Costco. And we have a pizza stone and a peel, and a bunch of random stuff we can throw on a pizza.

So we totally ninja-ed up some pizzas from stuff we had lying around the house. It was awesome because it was totally spontaneous. You couldn't have planned it better, and we pulled it off brilliantly without having the leave the house.

Anyway, Dan had to calculate the ratios of water, flour, salt and sugar, and he wrote them all down on the magnetic whiteboard we kept on our fridge.

Fast forward almost 3 years later, and we've moved to our new home, and have a stainless steel fridge that we haven't been able to put this whiteboard on, so it got stashed away in a cupboard. The pizza dough recipe is still written on it, though.

So with Sarah away, Bill and Victoria are coming around for dinner tonight to hang out, and I thought trying to make pizza again might be a fun experiment.

So I dug out the whiteboard with the trusty recipe, and Zoe and I made some dough this morning, and it's currently proofing in the oven.

Unfortunately the whiteboard only had the quantities and not the method on it, and from perusing other recipes on the Internet, I may not have mixed things properly (I just kind of threw things together and made it into a ball), so this first batch might be a total disaster. I might go and make a second batch while Zoe's napping.

Here's the contents of the whiteboard, for posterity (I'm hoping it says 10g of salt and not 18g, not that I think it'll affect the outcome too much): 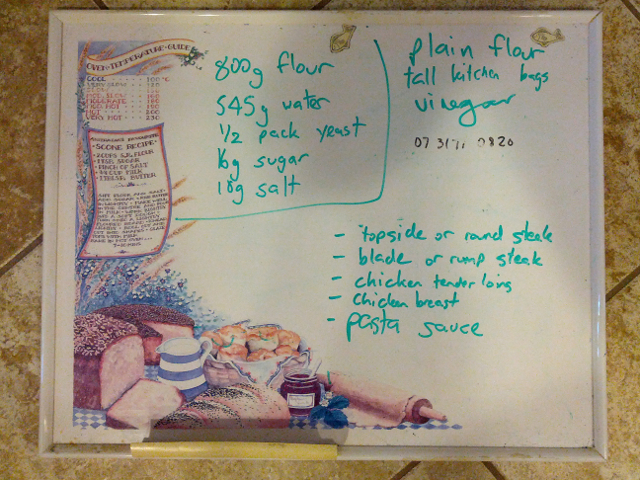 Sarah is back in Australia attending the graduation ceremony for her Bachelor of Business degree, at the University of Southern Queensland, an Australia University that specialises in distance education.

To say I'm immensely proud of her achievement is putting it lightly.

Consider for a moment all of the challenges she has had to face in the past 6 years since she started it:

Me, I'd fail at "studying remotely". Heck, I've had two stabs at a Bachelor of Information Technology on campus, and what do I have to show for it?

No, I'm so very very proud of her for sticking at it, and doing so very well (she twice received the Dean's Award for having a high GPA for the semester).

She decided to embark on a business degree after having a really hard time finding meaningful work when we moved to the US. She had been working in business project management for the Australian Federal Government (and really enjoying the work) before we moved, and couldn't find any project management that wasn't high-tech, which wasn't really her thing, and everything wanted a degree. She briefly contracted at VMWare, in a marketing position, and Google, in a Security Vulnerability Management role, but neither of these were really up her alley, so to speak.

So she went "bugger it" and enrolled in the degree. Ironically, mid-way through the course, she decided that nursing was more what she wanted to do, so she has also gone out and done short courses in health care. She has been licensed as a Certified Nurse Assistant and also a Phlebotomist, but never worked as either. She's just started an Emergency Medical Technician course at Mission College, and is keen to try and work in that field for a little while before starting on a post-graduate Nursing degree in Australia.

Sarah had indicated to me that she'd really love to go back for the on-campus graduation ceremony, since she's barely set foot on campus in the six years she's been studying at the university. I thought that was an excellent idea, so I sprang for a Business Class flight back for just her, and am staying behind to look after Zoe. It's only a flying visit. She departed Wednesday night, returns on Monday. As I write, she's probably at the ceremony right now.

Normally it would take 6 years to complete a degree externally, assuming two subjects a semester for 12 semesters. She's obviously had to take a few semesters off here and there because of some of the aforementioned challenges. To still finish the degree in 6 years, she's had to plow through the "summer" break (I say "summer" because it's during the Northern Hemisphere winter) and use the accelerated "summer semester", also known as "semester 3" to do an additional subject. That's meant that summers over here have been her shorter winter break.

This summer has been the first summer where she hasn't had to worry about studying, and it's been really wonderful to be a whole family again for an extended period of time, and we've had a jam packed summer as a result.

We bought a tent and did a small amount of camping. We've had weekends away with friends. We've been to Raging Waters. We've been to Disneyland (granted that was in between final exams). It's been go go go. So now that summer is almost over, I'm looking forward to the pace slowing down a bit more and things returning to "normal" (well the new "normal" is Sarah doing her EMT class a couple of nights a week until December). She's only just started, but she's really loving the on-campus aspect of it.

I'm also looking forward to getting a bit more "me" time. Since Zoe was born, I have sacrificed my personal time to facilitate Sarah's study. I haven't had much time to tinker and I've barely had time for Debian. I'm looking forward to trying to carve out a few hours a week for some of both, plus a bit of reading.