Another massive road trip coming up

It's not a Holiday Weekend unless it involves us putting heaps of miles on the car.

This time, we're going to Kirkland, where I'll work from for the week.

The route outlined on this image isn't quite the route we're going to take, we're going to camp amongst the redwoods on Saturday night, and stop off in Portland on Sunday night. On Friday night we'll stop where we drop, which we expect will be Ukiah.

The following weekend, on the way back, we'll take a more direct route, which will probably be closer to what's on the map. 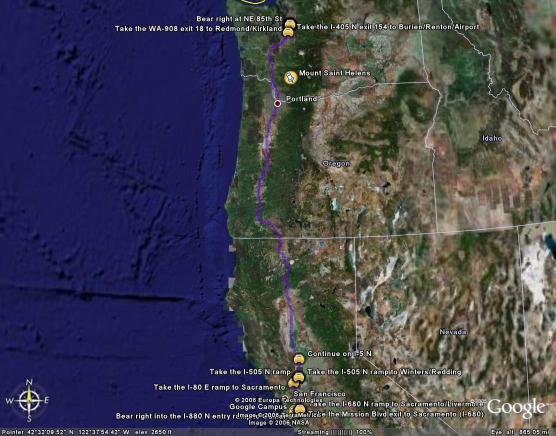 I'd managed to raise the requisite $150, just from hitting up people I host services for, which made it nice and easy (thanks again guys!).

The weather forecast was fairly ominous, but the rain stayed away until we got back. The ride itself was fairly leisurely. The highlight was cycling through Palo Alto and checking out the very nice looking houses.

25 kilometres was pretty easy. It took a little over an hour, so I think I'll try the 50 kilometre ride next year.

Some photos from the ride are here.

Time flies when you're having fun

Half a year ago yesterday, I stepped off a plane in the United States.

It's been an eventful 6 months, as can be seen from reviewing my blog, and I thought I'd summarise the top 10 things I like and dislike about living in this country as opposed to Australia.

Of course, one must take a balanced look at these things...

Ten things I don't like about living in the United States:

It feels like (probably because it is) about 2 years since I last had a good fiddle around with Debian's installer. It's been fun to have another play in the last week or so.

I've been on a mission to vanquish the ISC DHCPv2 packages, and I can't do this until the installer stops needing to use the udeb for dhclient.

Previously, the dhcp3-client udeb had been way too big for the job (apparently it's the OMAPI stuff that gets linked in, I'm told by David Hankins from the ISC). Matt Zimmerman had thrown around the idea of using ipconfig from klibc-utils quite some time ago, but it's taken me this long to get the spare time to look into it further.

Hacking the netcfg udeb to support ipconfig as a DHCP client was relatively trivial. dhcp.c wasn't too hair raising, and so I rebuilt the installer with my modified netcfg udeb and a udeb I made from the klibc source package, and it worked.

However, it's not as simple as that (it never is). There's a couple of special cases as I discovered when hacking dhcp.c in netcfg:

So, my work in this instance is probably all for naught, but it was fun anyway, and it's something I've been meaning to do for absolutely ages.

It is also hopefully a moot point, as apparently the space issues aren't so bad any more, so in theory the dhcp3-client udeb will now fit. The next dhcp3 upload will provide a dhcp3-client udeb again, so we'll see what happens on that front...

It's been 5 and a half months, but after another E3D visa holder got her work permit in only a month, we figured it was time to stop waiting patiently.

We went to the USCIS office in San Jose this morning to politely go "what the fuck?", and to my amazement, they didn't hesitate in issuing Sarah with an 8 month work permit on the spot. Apparently the full-blown one will come when its good and ready, but in the meantime, she's all good to go. Well, she can go try to get a Social Security number in 10 working days and see what happens...

While we were in the vicinity, we also went to the San Jose Social Security office, so I could have another go at applying for a Social Security card, after what happened last time.

Again, we waited for an hour, only to be told that no, they didn't keep my immigration verification on record, and I wasn't showing up appropriately on their computer system, so they'd need to re-request verification of my status from Immigration anyway. Argh!

Apparently this happens to other people, not just me, so it seems to be luck of the draw as to whether your vital statistics actually propagate through all the various Government systems or not.

So $DEITY only knows when or if I'll receive my Social Security card. At least I'm not sweating on it to get paid or anything.

Dinner with The Reg

A while ago, I read an article on The Register, written by a journo based in Mountain View of all places, which had a tagline at the bottom that said to email him if you wanted to "drink like a vulture" on some sort of corporate drinkies or something. Being in Mountain View and all, I could hardly resist.

Said journalist actually emailed me back, after Googling me, and it turned out he was half Australian himself, so what better excuse to catch up for dinner?

Tonight we had dinner with Ashlee Vance and his wife Melinda, at the Cantankerous Fish in downtown Mountain View, and had a really great time. It's cool when you meet the sort of people you can just chat with for hours and get along with, and they're complete strangers you've never met before.

It was a good night out.

Tonight, Sarah and I went to see Mission: Impossible III along with Sean and Louise.

It's not very often that the third movie in a run is better than the first, (I can't remember the second one terribly well), but wow, this was a mindblowingly good edge-of-the-seat job, with not one, not two, but three nail-biting, action-packed operations. I love it.

I'm still trying to unravel the plot twist at the end.

I've been wanting to have a play with Xen for quite some time, but have a pathological dislike of compiling kernels, so hadn't gotten around to it. So needless to say, I'm very very (very very) pleased to see Xen 3.0 packages in Debian now, and so spent some time today having a fiddle.

Frankly, I'm very pleased with how easy it's been to get everything going.

Mad props to Steve Kemp for xen-tools, it makes the ease of creating a new DomU approach that of falling off a log. A big thanks also to the Debian kernel team for packaging this stuff up at last as well.

The linux-image-2.6.16-1-xen-686 kernel package doesn't create an initrd by default, so I created one by hand with mkinitramfs-kpkg.

I put this in my GRUB config:

I'm currently using file-backed storage, but I want to switch to directly using LVM once I get the hang of things. I created the filesystem for the DomU with:

The one problem with this script is it puts SCSI (i.e. /etc/sda) devices in /etc/fstab, but refers to them as /dev/hda devices everywhere else. So to avoid a kernel panic on booting the DomU, I had to mount the image that was created and edit the /etc/fstab file to fix this up. I also needed to add vif = [ '' ] to get an eth0 interface to exist in the DomU instance. There's some other stuff you put here to use a consistent MAC address, rather than a per-instance-boot one.

I also found I needed to edit /etc/xen/xend-config.sxp to use network-bridge instead of network-dummy and vif-bridge. I found I needed to reboot as just restarting xend afterwards royally messed with the networking setup.

That was about it. Creating an instance of the VM then worked. Making sure the loop kernel module is loaded helps avoid some obscure errors.

How hot does your laptop run?

I noticed mine was frequently exceeding 60 degrees Celsius, and placed a service call the other day and Dell didn't bat an eyelid in replacing the heat-sink and fan (despite the fan working). The temperature is now being reported as 52 degrees.

Just curious as to what's "normal". The temperature can be obtained from /proc/acpi/thermal_zone/THM/temperature or /proc/i8k (if the i8k module is loaded, or via I8kfanGUI under Windows. I note that the temperature is reported as only 43 degrees under Windows, which makes me wonder whether Linux is misreporting it, or is causing it to run hot...

So about a month ago, I discovered that my driver's licence was stuck in bureaucratic hell.

Well the temporary piece of paper licence was due to expire on May 10, and so I called up the DMV again yesterday, and was told it was still pending. So I made an appointment to renew it.

Today, coincidentally, I received a brand new 120 day temporary piece of paper licence in the mail, with a note attached:

Your application for a California driver license cannot be completed. California law (Vehicle Code Section 12801.5) prohibits the issuance of a driver license until your legal presence, as authorized under federal law, has been verified. This information has not been received from the Immigration and Naturalization Service (INS).

Your application will remain valid for 12 months from the date you applied for your driver license. Your license will be issued and mailed to you as soon as the information is received from INS. We regret any inconvenience this may cause you.

The process inconsistencies are incredible. I know of two other E-3 visa holders that have received their proper licences without significant delay. I seem to be cursed.