Sarah's little bottle of wisdom (or My wife, the chipmunk)

Sarah had her wisdom teeth taken out this morning. The bottom two were impacted, and the top two didn't have enough room to come down, so they all had to go.

I'm taking today and tomorrow off to look after her.

The surgery went fine. She had what they call "twilight" anaesthetic, as she didn't cope too well with the general anaesthetic last year when she had her arthroscopy. She's still a bit groggy, and I don't think the local anaesthetic in her gums has worn off yet, because she isn't feeling too sore, but the swelling is starting to kick in. It's bled a bit more than I'd have expected.

She got to keep the teeth, and they're huge! The bottom two are a bit grey and festy in parts. In the photo below, the outside two are the bottom two, and the middle two are the top two. Not sure what was left and right. 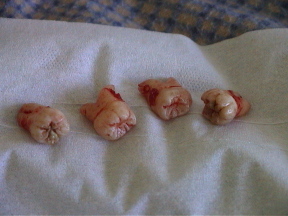 Sarah and I had to go to the US Consulate in Sydney for my E-3 visa application on Friday, so we decided to make a bit of a long weekend of it.

So first up, we drove to Artarmon on Friday morning, and ditched the car at Sarah's Aunty Glenda's place (she was the MC at our wedding). We jumped on a train, which managed to

until we got into town, where we headed into the Consulate. Michael and Catherine had an earlier appointment that morning, and they were as successful as you can be on the day with their application.

We said a quick hello to them in Martin Place and headed up to the Consulate, as Michael said things were starting to get busy, so I figured the sooner we got in the queue, the sooner we'd get processed.

Security was interesting. Reception was on level 10, and we rocked up to what appeared to be a very temporary looking setup: a room with an "in" door and an "out door" at opposite ends of one wall, a bunch of chairs arranged in a sort of seminar layout, and a desk with a security guard.

The guard quizzed us as to who we were, if we had an appointment and ID and whatnot, and checked our names off against a list, and then searched our bags and ran a metal-detector wand over us and directed us to take a seat.

Half a minute later, another guard appeared, and ushered us into an elevator, which he had to swipe a card to get to go to something like the 59th floor.

Upon alighting from the elevator, we were presented with another desk with a pair of security guards, who again quizzed us as to who we were and what we were doing there, and then got us to empty our pockets to walk through an airport-style metal-detector. I'd brought my laptop bag (sans laptop) to hold all our paperwork, and that had a drink bottle with water in it on the side. The guard asked if it was water, and when we said it was, asked Sarah to have a drink of it to confirm it was safe. She took a sip and then proceeded to have a massive coughing fit. I thought we were going to get chucked out before we'd even started. She reassured them that it was okay, and took another sip and had another massive coughing fit! Fortunately the guards had a sense of humour about it all and let us in.

We had a minor glitch with our paperwork, which my sponsor is sorting out at the moment, so we came away with our application being placed on hold. Eligibility-wise, it shouldn't be a problem though, which was more what I was worried about. The whole process took about 2 hours (and most of that was waiting around. We probably spent a total of about 10 minutes actually talking to people).

Next we had lunch with a couple of friends of Sarah, and then did a spot of shopping, and then jumped back on the train to Artarmon. We had a few drinks at the local pub with my mate Andrew (who conveniently lives two streets from Sarah's Aunty), and another former work colleague, and then had dinner with Andrew, back at Sarah's Aunty's place.

I awoke on Saturday morning thinking I was in a wind tunnel, there that much wind howling around outside. Shortly after that, there was a huge bang, and part of a tree across the road had blown over onto the power lines, so that was it for electricity for the remainder of our stay that morning. We got to watch the electricity company come out, chop all the wires off and chainsaw up the tree limb. Then we headed off to Newcastle to visit our friends Michael and Elise. I'd managed to sleep funny and pulled a muscle in my neck, so Sarah had to do the remainder of the driving.

We stayed the night with Michael and Elise, and then headed back to Wollongong to visit my boss, who has moved from Canberra to an absolutely gorgeous house on the coast, and then we headed home, arriving back at about 6:30pm on Sunday night.

So we had a busy weekend, but an enjoyable one. Would have been nicer if I hadn't had the paperwork problems with the visa, as I still have no idea of any time frames for relocation.

A picture tells a thousand words